The Unified Theory of Medicine

“Disease is not an entity, but a fluctuating condition of the patient’s body, a battle between the substance of disease and the natural self-healing tendency of the body.”—Hippocrates
“Illnesses do not come upon us out of the blue. They are developed from small daily sins against Nature. When enough sins have accumulated, illnesses will suddenly appear.”—Hippocrates

The "unified theory of medicine" was proposed by Hans Selye to explain the nature and relationships of physiology, pathology, and stress. It postulates the presence of a single physiological mechanism in humans and animals that appears early during embryological development and converts the DNA “blueprint” into cell specialization and organization that enables embryological structural development.  The stress mechanism remains continuously active throughout the remainder of life to maintain and repair mature structures and regulate physiology to maintain the “internal milieu” that enables cell survival and optimizes cell function. Hyperactivity of the stress mechanism induced by combinations of environmental stresses produces disease manifestations. Meanwhile, the DNA mechanism mostly resumes quiescence once embryological development is complete.

Selye’s theory provides the simplest, and therefore the most promising explanation of the nature of disease, but the theory was useless without a testable description of the stress mechanism that explains how it works. Many believed that the discovery of such a mechanism would revolutionize medicine, and perhaps explain the very nature of life. Stress theory thus became the prevailing paradigm of medical research after the discovery of DNA, and it inspired an intense international search for the stress mechanism that lasted 30 years but failed to find any clue of any mechanism that might explain Selye’s theory. Stress theory was then abandoned for another 30 years while unrelated research accumulated fresh relevant information relevant. Finally, sixty years after Selye postulated his theory, this fresh information has enabled a description of the elusive stress mechanism. The recently described "mammalian stress mechanism" fulfills all the predictions and expectations of the old stress researchers. Much work remains to be done, but the theory immediately confers a theory of anesthesia that optimizes surgical outcome, and life-saving treatments for cancer, Lyme Disease, sepsis, MRSA, DIC,asthma, pneumonia, influenza,  eclampsia, MOFS, spinal cord syndrome, sacral decubitus, and other critical illnesses. It's acceptance will be determined by politics rather than science, for the commercial interests that presently control politics have no reason to accept let alone promote the restoration of stress theory. 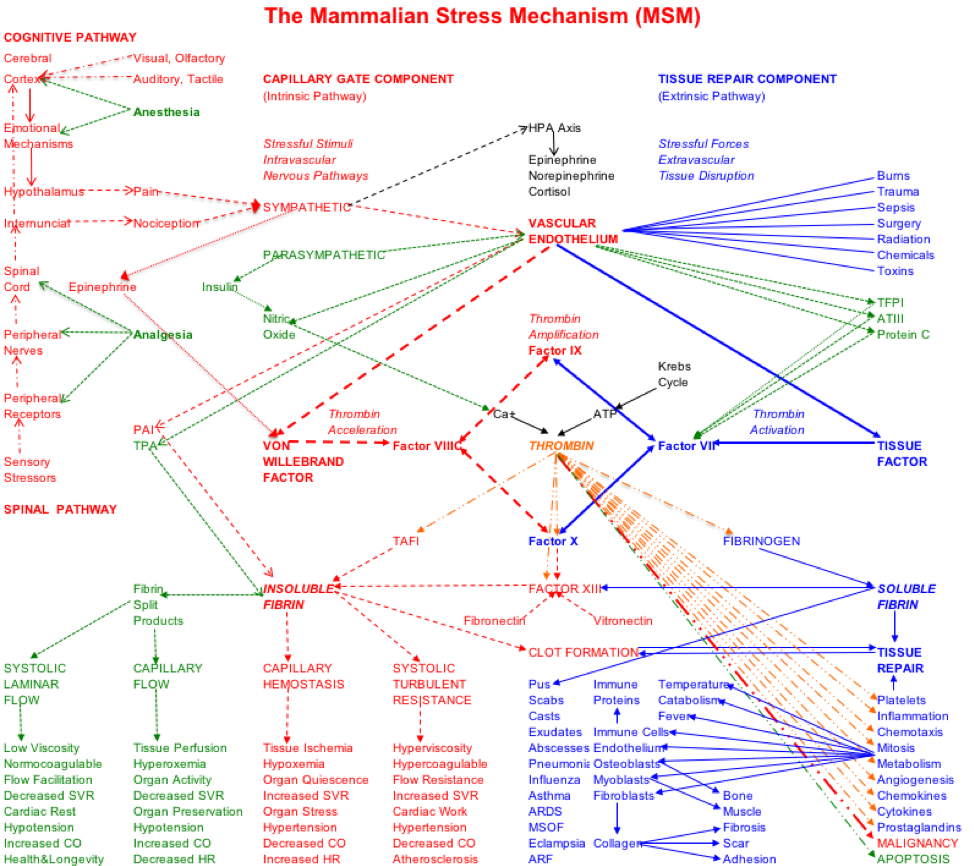